The growing tension between the U.S. and China has led to a play in the market of shorting American stocks that are highly exposed to China or to the markets that China is slapping counter-tariffs on. 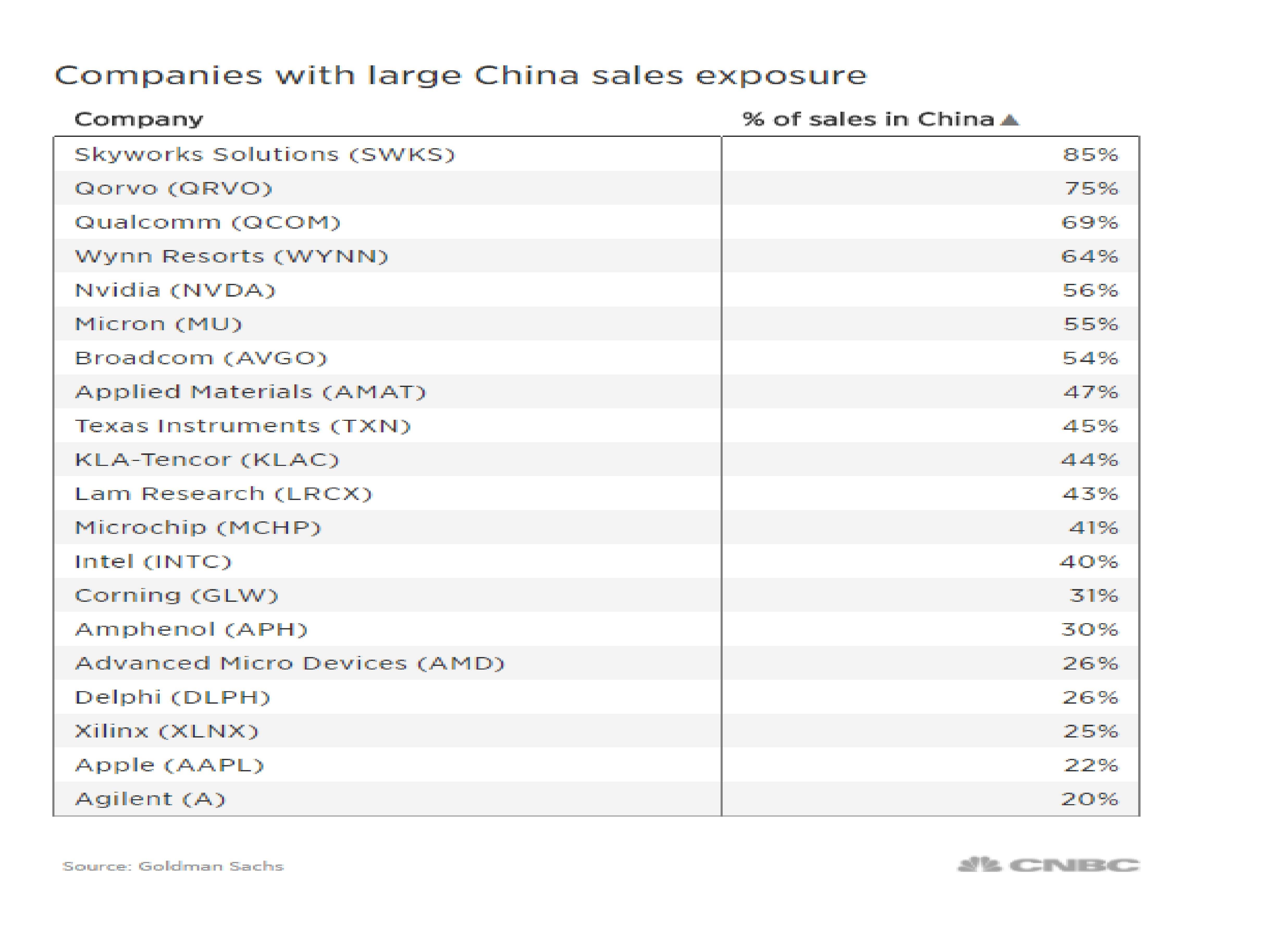 The list is dominated by technology chip suppliers that sell their products to manufacturers in China. Any trade issues between the U.S. and the Asian country could severely disrupt the global technology supply chain for companies such as Apple.

Ironically, Boeing (not listed above) may be one of the companies most at risk from a trade war. The company announced a $37 billion order for its planes from China last year.

Not so long ago President Trump was hailing the rise of the US equity market as a bell-weather for the success of his Presidency. Just last week he said, in the glow of his trade war spat that the markets might have to suffer so that the nation becomes greater.

He claimed the market has gone up 425 so there may be losses from these levels, however, the U.S. will be a much stronger country when he was finished.

One tries to be non-partisan, but the President is essentially incorrect as the Dow Jones Industrials is now up about 20% from 19,799, where it stood the Monday after his inauguration, approximately 15-months ago, and about 28% higher than it was the day he was elected in November 2016.

Maybe he is referring to the peak levels in January this year but that was almost two months ago.

The one thing about this President is that it is anything but politics as usual, and the full view is that he is just a really tough negotiator that will cause a stir in diplomatic circles but that the fundamentals of the US and global economy are in good shape and that China and other trade partners will prefer to talk even if right into the late hours rather than establish tariffs that will harm everyone. 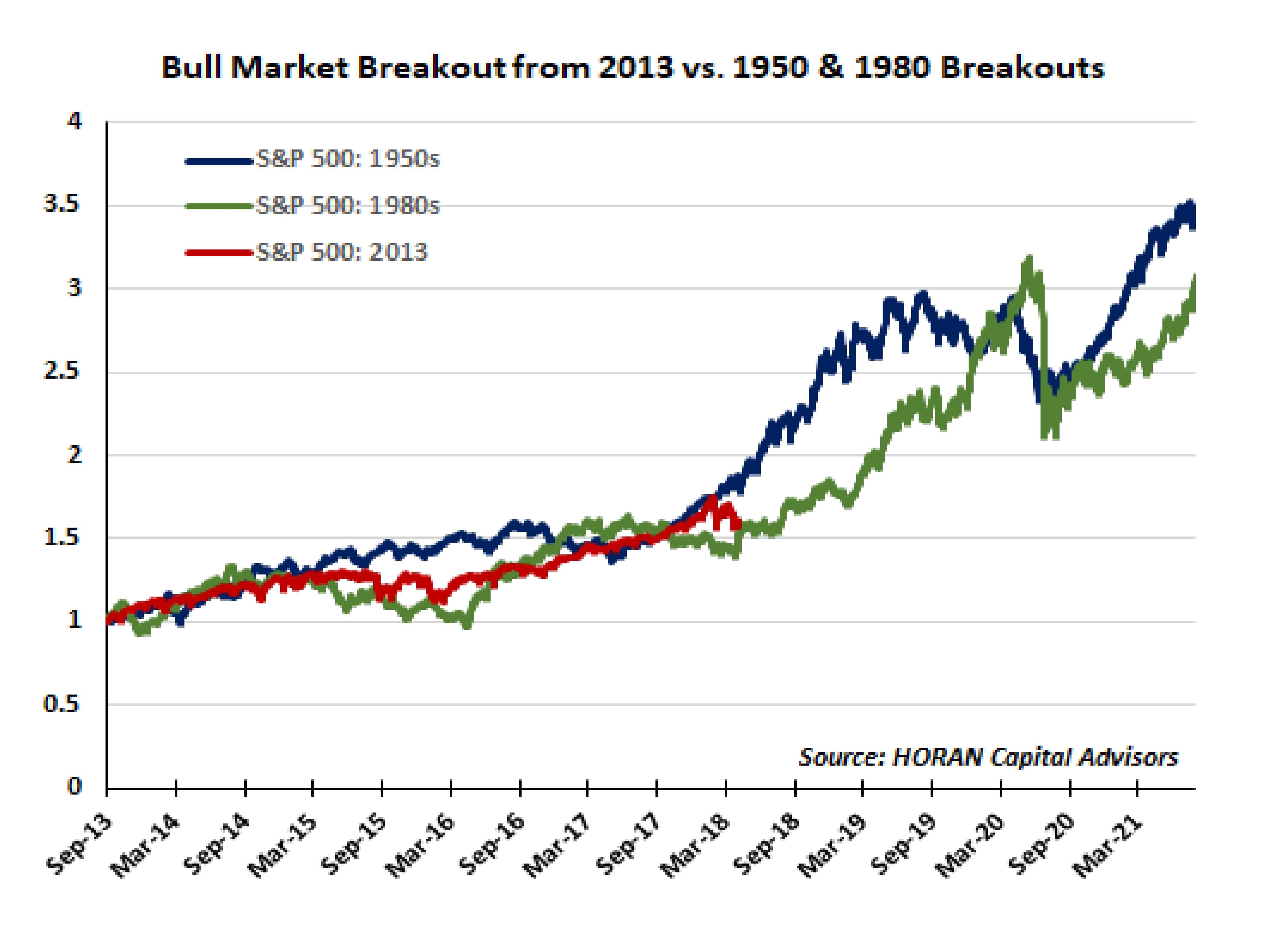 Yields over the past month have risen in the front end, 12-months out to three or four years. Longer out on the curve the rates are relatively steady to lower. So, strategies such as bond laddering and short-duration bonds have not found too many takers.

However, as we press deeper into a period of expected rate normalization it would be foolish to over look these plays or even building higher exposure to Floaters or Inflation Protected paper. Indeed, on a year-to-date basis, floating-rate notes are one of the better performing bonds as short-term interest rates move higher.

On March 21st, the Federal Open Market Committee voted to increase the Federal Funds Rate target for the sixth time since December 2015. As the Federal Reserve (Fed) continues to tighten policy, the ability to generate returns in short-dated fixed income, 13-week paper has increased.

Into the three-month T-Bill investors have piled nearly $6.7 Billion over the last year into two exchange-traded funds (ETFs) that seek to track one- to three-month Treasury Bills.

The yield for a 13-week T-Bill is set at a weekly auction, but why not look at Treasury floaters? These first appeared in January 2014 and pay a coupon on a quarterly basis and mature in two years.

The coupon rate floats and is based on the 13-week T-Bill yield plus a spread.

The sweet deal is that the duration of the FRN is only one week because that is the amount of time between interest rate resets.

The range in EURUSD since January has offered chances to trade, however, one has had to be fleet of fingers to hit the BUY or SELL button during this period. Be prepared for more of the same in the week ahead.

The slight dip below support and recovery back above was enough of a bullish rejection to tilt momentum to the topside. If the week low at 1.2215 holds, an upward bias will remain intact. Looking higher, major resistance arrives again at the 2008 trend-line about 1.2450, in truth EURUSD remains choppy.

This past week’s data prints disappointed overall with PMI readings sharply lower, due to the recent spell of bad weather in the UK. Overall the composite PMI edged just 0.1% lower on the month with a decent beat in UK manufacturing providing support. Car buyers also were inactive, even with the new number plate arriving; new car sales dumping 15.7% YoY.

So time to alter the outlook for GBP to neutral from bullish on a fairly light economic calendar next week not proving helpful to traders in their decision-making process.

The cryptocurrency markets held fairly steady this week, with Bitcoin Dollar (BTCUSD) not venturing too far away from $7,000, even amid news that India’s central bank would stop dealing with crypto-related businesses.

The relatively steady prices may well be down to the fact that there was a significant adoption win in Asia during the past week when Omise and OmiseGO signed a Memorandum of Understanding for fintech and Blockchain innovation with a South Korean banking affiliate.

Gold prices dipped last week to more than a fortnight low and a nearly four-month old ascending trend-line was tested. However, if the quote rises beyond $1333, then $1341 and $1348 before a new assault on $1356 is staged.

Silver failed to clear short-term trend-line resistance, and Silver seems to be heading towards $16.17-15 horizontal-line. A break of $16.10 could entertain more selling to even be so bold as to look for $15.80.

Trading was volatile as oil was caught in the emotion that global growth could be derailed as China warned it would fight back at any cost with fresh trade measures if the Trump Administration continues its path of protectionism.

Let’s take a moment to think about Soybeans. In a move that surprised many in U.S. China said on Wednesday announced planned tariffs on American shipments of the crop. The measures are set to take effect in 60 days, so it gives some farmers the opportunity of making a last-gasp switch to another crop. But for many, it’s too late to make a change.

Most North American farmers have by now purchased seed, fertilizer and other inputs based on what they intend to plant in the spring. Even though they can tweak their plans, those big costs largely lock them in. In addition, freezing temperatures and snow in the Midwest are keeping some farmers off their fields right now.

The adverse weather could end up having a greater impact on acreage than concerns about trade tariffs because soybeans can be planted later than corn.