The Dow Jones Industrial Average (DJIA)and the S&P 500 (SPX) remained in correction territory on Friday even though they closed higher after turbulent week. 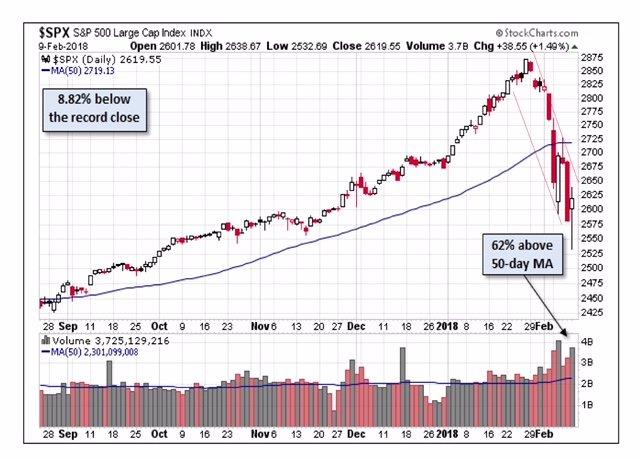 Despite the positive finish to the week, both indexes posted their worst weekly losses since January 2016.

In contrast, the technology-based Nasdaq Composite rose 1.4% to 6,874 points, giving the its worst week since February 2016.

If one takes the levels where the main equity indices closed on February 2nd, 2018 and December 29th, 2017 one can see the change of the week and year to date in local currency reads as:

The big sell-off that has been seen around the world in the past week have been driven by concerns over the prospect of higher interest rates.

Bank of England Deputy Governor Ben Broadbent said markets might have underestimated the prospect of a pick-up in inflation. They rose last year on growth prospects but had not priced in any accompanying inflation and increased interest rates. He added that what was being seen now was the effect of that realisation.

However, there is a growing sense of frustration with the selloff as at the start of the year and two weeks back at Davos all the talk was of globally coordinated and synchronous growth. Everyone liked the good earnings and guidance.

There was talk…back in 2017 that US wage growth was too slow. So. a good data point on February 2nd and suddenly we lose 10% of value?

If there is full employment and the Fed or other central banks act to moderate inflation as wages grow…the marginal propensity to consume and income elasticity of demand should lift consumer spending and raise revenue…so boosting bottom line. So, one wonders if the recent price action is nothing more than a healthy shakeout?

In January, the 10-year U.S. Treasury (T10) broke out of a long descending channel with T10 yields rising by 9bps on the week to close on Friday at 2.86%. If T10 hits 3.0%, it will be interesting to find out if that would be taken as an opportunity to go long bonds or induce further selling. The last time these yields were north of 3.0% was in January 2014.

One can almost taste the level of concern in the bond market given that Fed holdings are being reduced and new issuance is set to rise. After the financial crisis the Fed began to both leave short rates near zero and aggressively add to its balance sheet.

In September 2008, SOMA (system open market account) holdings were $473 Billion. This was followed by three waves of quantitative easing so that by April 2017, SOMA holdings had ballooned to $4.24 Trillion.

The Fed began curtailing its bloated balance sheet last October by $10 Billion/month through December, followed by acceleration in the pace every three months. By October 2018, the balance sheet would have been reduced by up to $50 billion/month (comprising both Treasuries and mortgage-backed securities). This means balance sheet reductions of $600 Billion a year.

So far, overseas accounts have continued to acquire Treasury securities as at last November, they held $6.34 Trillion in Treasury paper, down slightly from October’s record $6.35 Trillion.

Normally when issuance has risen, so have foreign purchases, however, in March 2016, foreigners held $6.29 Trillion implying their holdings have essentially been flat for over 18-months. They have not been increasing purchases and it looks certain that Treasury issuance will be trending higher in 2018.

The Dollar was little changed against a basket of the other major currencies on Friday but recorded its strongest week in almost 15-months following a turbulent week in stock and bond markets around the world.

The U.S. Dollar Index was steady at 90.22 in late trade. For the week, the index was up 1.45%, having recovered from a three-year low set two weeks ago.

The Dollar was supported by increased safe haven demand from investors amid dramatic moves in the equities and bond markets. This held as Congress and U.S. President Donald Trump approved a federal budget plan that ended an overnight federal shutdown.

This allowed the Dollar to push higher against the traditional safe haven Swiss franc, with USDCHF climbing 0.33% to 0.9392. It also was steady against the Yen following Thursday’s declines, with USDJPY last at 108.78.

EURUSD was steady at 1.2250 in late trade. The single currency ended the week down 1.82%, the largest weekly percentage decline since November 2016.

Sterling had pushed higher on Thursday after the Bank of England warned that interest rates may need to rise sooner than had been expected but on Friday Sterling weakened against the Dollar and the Euro on Friday after Michel Barnier, the European Unions Brexit negotiator warned Britain that a post-Brexit transition deal was not a given.

Bitcoin prices continued their volatile pattern after a particularly rough month. The price dipped back below $8,000 on Sunday morning after briefly surpassing $9,000 earlier on Saturday, the latter being a week high.

BTCUSD has lost more than half its value since hitting an all-time high of more than $19,000 at the end of last year. The decline is because the cryptocurrency has landed in the sights of regulators in recent weeks, dampening some of the appetite among investors.

Last week Lloyds became the first major bank in the UK to prohibit buying of bitcoin with its credit cards. And this may well be followed by Irish banks. The digital money was not helped after an official from the ECB called it a gold rush with no gold, while finance heads in France and Germany called for a crackdown.

Gold prices edged lower on Friday in what was the fifth day of declines in the last six as the stronger Dollar weighed on the precious metal. Gold futures for April delivery settled at $1,315.70/Troy Oz on the Comex division of the New York Mercantile Exchange. For the week, prices were down 1.62%.

Among base metals, copper prices fell for the sixth straight session on Friday amid concerns over building supplies. Copper for March delivery was down 1.04% at $3.050/lb in late trade and ended the week down 4.75%. It was the lowest close since mid-December and the largest weekly percentage decline since November 2014.

Oil prices finished lower for a sixth straight session on Friday to tally their worst weekly loss in two years, as investors continued to fret over soaring U.S. output levels.

The number of oil drilling rigs jumped by 26 to 791 last week according to the Baker Hughes report on Friday. That was a third straight week of increases and the largest weekly rise in more than a year, implying that further gains in domestic production are ahead.

Have a great week

USD downside continues amidst thin trade to end the week