Wall Street continued the rally and closed on Friday with record closing highs as the Q4 2017 earnings season began with solid results from financials.

Wells Fargo earnings beat expectations, however, its shares slipped 0.7% after it set aside $3.25 Billion in Q4 to cover legal expenses related to probes into its mortgage and sales practices.

BlackRock rose 3.3% as the asset manager reported a profit that beat estimates as investors flooded into the relatively low-cost funds.

The S&P 500 and NASDAQ have registered eight record closing highs out of the first nine trading days of 2018, while the Dow boasted its sixth closing high of the year.

They will have been encouraged by the fact that major money center banks are beating estimates on the bottom line as it is clearly a good auger for the rest of the earnings season.

Earnings for S&P 500 companies are expected to increase by an average of 12.1% in Q4 2017 with profit for financial services companies likely to increase by 13.2%. (Source: Thomson Reuters I/B/E/S).

In Europe, German stocks were higher by 0.32% after the close on Friday, as gains in the Media, Technology and Insurance sectors led shares higher.

The CAC 40 finished higher by 0.52% after the close on Friday, as gains in the Oil & Gas, Basic Materials and Healthcare sectors led shares higher.

Meanwhile, the FTSE 100 pushed ahead to a record finish at 7,778.64 points, having touched an intraday high of 7,790.9 points earlier in the afternoon.

The index was carried higher by engineering firm GKN, which shot up more than 28% after it said it had received an unsolicited takeover offer from Melrose Industries.

The two-year U.S. Treasury (T2) yield rose above 2% for the first time since September 2008 after failing to rise above 1% through much of 2016, the yield surged following President Donald Trump’s election victory and continued its rise throughout 2017 as policy makers delivered three rate increases.

The U.S. Treasury market was under pressure on Friday as data revealed that the underlying pace of U.S. inflation accelerated last month finally drove it above 2.0%. The market-implied probability of a Fed rate increase in March exceeded 80%.

U.S. Treasuries fell broadly, with the difference between yields on five- and 30-year maturities approaching the smallest since 2007. See the orange bounded area in the left-hand chart below. 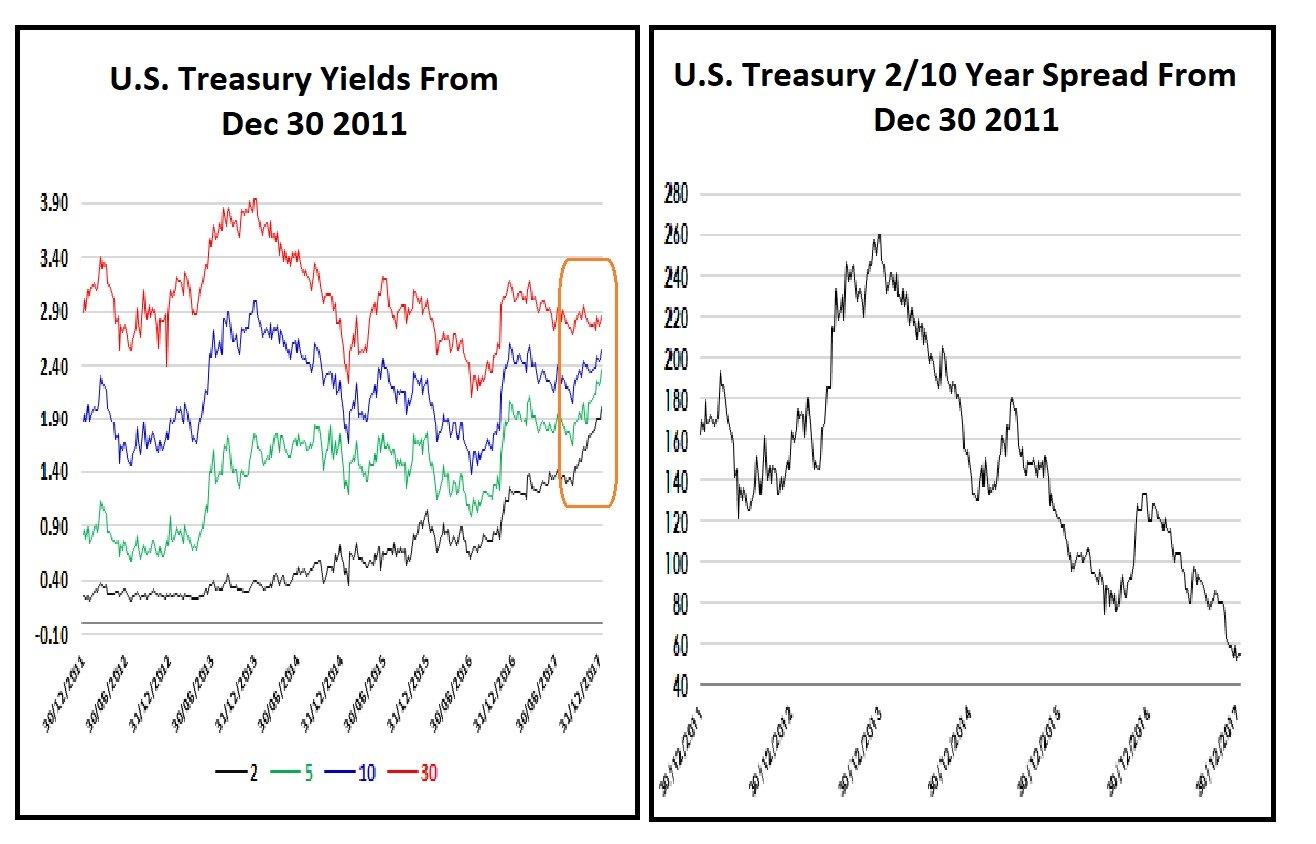 The last time the T2 yielded 2% was on September 30th, 2008, about two weeks after the collapse of Lehman Brothers Holdings Inc., which sparked a global flight to safety.

Yields on short-dated bonds in the Eurozone, the most sensitive to changes in interest rates, have also started to move higher, indicating that expectations of tighter monetary policy from the ECB are starting to outweigh the impact of so-called quantitative easing (QE).

The past week saw the EURUSD break through some of the major resistances and sought to make some new highs during the week. The week had begun in a slowly with a period of correction during the first half of the week as the Dollar rose slightly during this period. This caused the pair to fall through the 1.20 region and trade briefly below the 1.19 region as well.

This turned out to be only a short-term move as there was a reversal in the fortunes of the Euro stemming from the release of the ECB meeting minutes from December that showed members had expressed confidence in the way that the Eurozone economy and inflation was moving. They felt that soon they would start looking at shifting away from the current policy.

As of the end of 2017, the digital currency was listed as a way to pay for some 75 properties for sale, especially in south Florida and California, according to the real estate firm Redfin. One seller is going even farther, saying he will take only bitcoin for his half-million-dollar downtown condo in the Florida metropolis. The price is 33 Bitcoin.

Sterling spent most of the week confined within a tight range and it was more a phase of consolidation. There was a little direction to be gained from fundamental developments as data was also not very decisive, however, Sterling bulls caught a ride on the back of the making significant gains against the Euro to close out the week at 1.3729, a gain of 1.16% on the week.

The number of oil rigs operating in the U.S. rose by 10 to 752, its highest level in more than four months, according to data from energy services firm Baker Hughes. Crude oil prices settled at three-year highs on Friday as signs of growing US production was offset by ongoing optimism that OPEC-led output cuts would continue to drain the market of excess supplies.

On the New York Mercantile Exchange WTI crude futures for January delivery rose 54 cents to settle at $64.30 a barrel, while on London’s Intercontinental Exchange, Brent gained 56 cents to trade at $83 a barrel.

Gold prices rose to four-month highs shrugging off renewed signs of U.S. inflationary pressure as dollar fell to lows amid euro and sterling pressure.
Gold futures for February delivery on the Comex division of the New York Mercantile Exchange rose by $11.20, or 0.85%, to $1,333.70 a Troy ounce.