The sentiment is that global growth should continue its firm track that the G-3 and Chinese economies will keep performing strongly as expected.

One should look for central banks to reduce their accommodation similarly to consensus expectations and with that backdrop, look for bond yields to rise mildly, the USD to be relatively flat and equity markets to rise.

Over the last 50 years, share prices have tended to decline when yields rise sharply over a month, according to a study published by Goldman Sachs. They defined that as a move of about 40 bps under current conditions. That is approximately what the market experienced in the month through February 1st. That sent the S&P 500 Index to its first 10% correction in two years.

The speed of rising interest rates poses a more immediate risk to equities than does the level of rates. 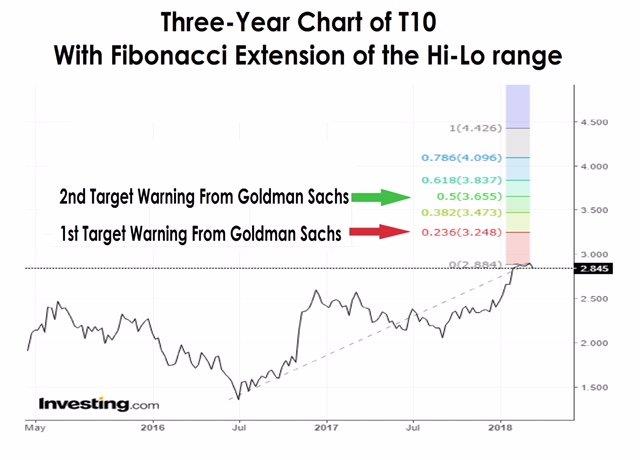 Wall Street inched up on Friday as investors struggled to shrug off political uncertainty in Washington.

U.S. President Donald Trump has decided to fire national security adviser H.R. McMaster, according to the Washington Post. It’s the latest in a string of White House firings and resignations. Last week former economic adviser Gary Cohn resigned after speaking out against Trump’s tariffs on steel and aluminum while Secretary of State Rex Tillerson was fired earlier this week.

Meanwhile, markets were in once again in turmoil over a potential trade war. A Trump imposed import tariff on steel and aluminum has left traders on edge, as increased fears of a global trade war weigh on investor appetite for riskier assets.

German stocks were mixed after the close on Friday, as gains in the Telecoms, Food & Beverages and Insurance sectors led shares higher while losses in the Software, Financial Services.

French stocks were higher after the close on Friday, as gains in the Oil & Gas, Utilities and Financials sectors led shares higher.

The U.S. Dollar remained broadly lower against other major currencies on Friday, after the release of downbeat U.S. housing sector data. The U.S. Commerce Department reported on Friday that housing starts decreased 7.0% to 1.236 million units last month, compared to forecasts for an increase to 1.290 million units.

The report also showed that building permits fell 5.7% to 1.298 million units in February, disappointing expectations for a rise to 1.320 million units.

Adding to concerns over U.S. politics, fears of potential trade wars were reignited after Donald Trump announced plans this week to impose tariffs on up to $60 Billion of Chinese imports, specifically targeting the technology and telecommunications sectors.

The U.S. Dollar Index, which measures the greenback’s strength against a trade-weighted basket of six major currencies, was down 0.19% at 89.97 off a one-week high of 90.17 on Thursday.

Earlier Friday, Eurostat reported that the Eurozone consumer price index rose 1.1% in February from the same month a year earlier. Economists had expected annual inflation to rise by 1.2%.

Bitcoin was under pressure as the 50-day moving average has dropped to the closest proximity to its 200-day moving average in nine months. Crossing below that level, this has not happened since 2015 and signals fresh weakness to come for technical traders who would dub such a move a “death cross.” Another moving-average indicator of momentum has already turned bearish.

Gold prices are going to have tricky time this coming week as we await the Fed rate decision and outlook. They were originally enjoying a good start last week, boosted by a U.S. CPI report. There, February’s inflation was in-line with expectations. The downside was that real average hourly earnings dropped, from +0.7% MoM to +0.4% MoM. The Dollar fell on that aspect and this increased demand for gold. However, the Dollar appreciated broadly against its major counterparts so weakening the appeal of gold and caused it to close at its lowest point in more than two months. The move appeared to reflect pre-positioning for next week’s FOMC monetary policy announcement.

This meeting is scheduled to occur on Wednesday at 18:00 GMT. However, investors will be paying attention to the new Fed Chair. At the end of February, Fed’s new Chair Jerome Powell hinted the possibility of a fourth-rate hike by the end of the year.

Thus, the forward guidance of the monetary policy announcement will be what traders care most about. At this point, three rate hikes are just about priced in for this year looking at Fed Funds Futures. If the tone from the central bank echoes Mr. Powell’s favorable outlook for the economy, we could see an increase in hawkish policy expectations. This risks boosting the Dollar and weakening gold.

Oil prices managed to climb this last week and were up on Friday without any clear catalyst. What is clear is that while the threat of steel tariffs and strong U.S. crude oil production, which rose again in the week ending March 09 to 10.381 million bpd, seems to be limiting gains, there are insufficient catalysts to bring oil prices down.

The total number of oil and gas rigs now stands at 990, which is an addition of 201 rigs year over year.

The number of oil rigs in the United States increased by 4 this week, for a total of 800 active oil wells in the U.S, a figure that is 169 more rigs than this time last year.

Economic Calendar, all times are GMT: ***On Sunday 11th March the USA switched to Daylight Savings NYC will be GMT “ 4 hours