There was an underlying sense of strength in the U.S. equity markets for even with weakness in the financial sector the S&P 500 printed a five-month high and the NASAQ hit a new record.

Wells Fargo & Co said on Friday its loan book reduced in size and it earned less fee revenue than a year ago.

The bank said much of the lending decline was down to a deliberate move to avoid riskier loans, but the Q2 results sparked concerns fears about lingering reputational damage from Wells Fargo’s false accounts scandal and other abuses of customer rights.

The total average loan balance for the bank shrank 1% in Q2 from a year earlier as its consumer loan book fell by 2% and commercial real estate lending slowed.

Wells Fargo has been running down financial crisis-era mortgage portfolios and dialing back lending in other businesses like autos where it sees too much risk. Its most recent pullback is in commercial real estate lending.

Boeing Co issued a statement on Friday it would incur a charge of $124 Million in Q2 related to the sale of some production facilities to Spirit Aerosystems.

The announcement came after the Delaware Supreme Court ruled that the planemaker is not entitled to recover certain costs associated with the 2005 sale of its production facilities in Wichita, Kansas to Spirit. The charge translates to 21 cents per share.

German stocks were mixed after the close on Friday, as gains in the Food & Beverages, Transportation & Logistics and Technology sectors led shares higher while losses in the Retail, Telecoms and Utilities sectors led shares lower.

French stocks were higher after the close on Friday, as gains in the Consumer Goods, Consumer Services and Industrials sectors led shares higher. At the close in Paris, the CAC 40 rose 0.43%.

U.K. stocks were higher after the close on Friday, as gains in the Industrial Metals & Mining, Software & Computer Services and Industrial Engineering sectors led shares higher.

The Fed reiterated that it “expects that further gradual increases” in interest rates would be appropriate given “solid” growth.

Fed Chairman Jerome Powell will answer questions on the report before lawmakers on Tuesday and Wednesday.

Rising bond prices in Europe helped to support demand for Treasuries in early trading, spurring the appetite for the safe-haven bid.

The yield curve on U.S. Treasuries once again reached its flattest level in 11 years. The spread between 2-year and 10-year Treasury notes fell to 24.46 bps.

There was a relatively weak reception for the 3-year Treasury note offering on Tuesday with a 2.5bps tail and a 2.5X cover compared with stronger demand for longer-dated debt auctions later in the week. This has to be seen as a signal that investors were definitely in the long-end of the curve.

The Treasury sale for $22 Billion in 10-year notes resulted in primary dealers taking their smallest share of supply since January. An additional $14 billion in 30-year bonds were successfully offered on Thursday. 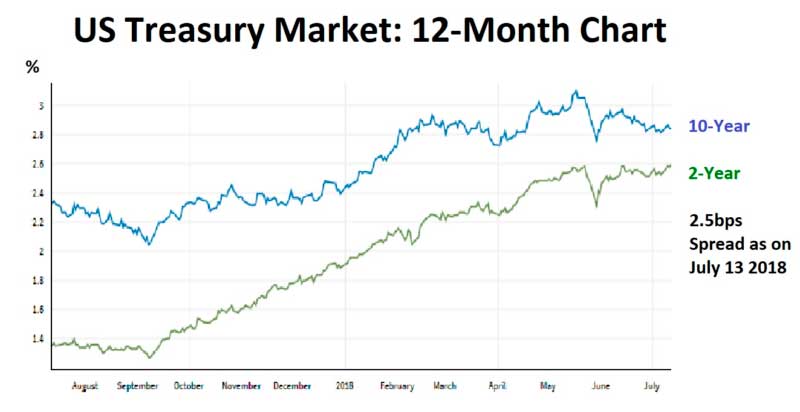 Emerging market debt is under pressure as the ultra-loose Fed policy post the financial crisis saw many dollars flow into the high yielding EM markets. The aggressive levels of demand led to plenty of new issuance which now the Fed is tightening rates again which favours the Dollar is making life difficult for EM governments and corporations that are starting to feel a pinch in servicing their debt. Corporate debt to GDP in EM nations a decade ago stood at 63%, a level that is somewhat uncomfortable. It is now measured at 94%!

Opinion on Wall Street is divided as Morgan Stanley recommend selling any gains as they appear in the EM space, whereas in contrast, Goldman Sachs see a great opportunity in the recent price declines.

The Euro remains under pressure these days, with the EURUSD is on track to finish the week in the negative territory after three weeks of gains. The price slipped to multiday lows of 1.1625 and now threatens the 1.16 threshold.

The pair managed to bounce from lows yesterday but failed to get back above the 1.17 key figure despite the mixed nature of US CPI data. The USD received a local boost from positive comments by the Fed chair Powell who said the country’s economy is currently in a good place. The overall USD bullishness still comes from safe haven demand* amid trade war jitters, as well as from Fed’s tightening path in contrast with the uncertain outlook for the ECB policy.

Sterling was a currency that was pulled from pillar to post as at the start of the week two cabinet ministers, David Davis (exiting the EU) and Boris Johnson (Foreign Secretary) resigned. The President Trump appeared to take a pot shot at the Prime Minister’s Brexit plan before suddenly reversing course on Friday.

At one point as the week began it was felt there was a risk of a swift leadership challenge, that could have taken EURGBP to 0.9091, however, this did not materialise. There appears to be no appetite for such a disruptive saga raging on over the summer that would set Brexit back and could lead yet another general election. On a monthly basis the Euro is favoured over GBP with a gentle, as against dramatic pathway to above 0.9000 on the cards with 0.9110 seen as the third Fibonacci resistance.

Gold prices resumed their decline and remained on track for their lowest settlement in nearly two weeks as easing trade-war concerns offset the dollar’s retreat against its rivals from a two-week high. 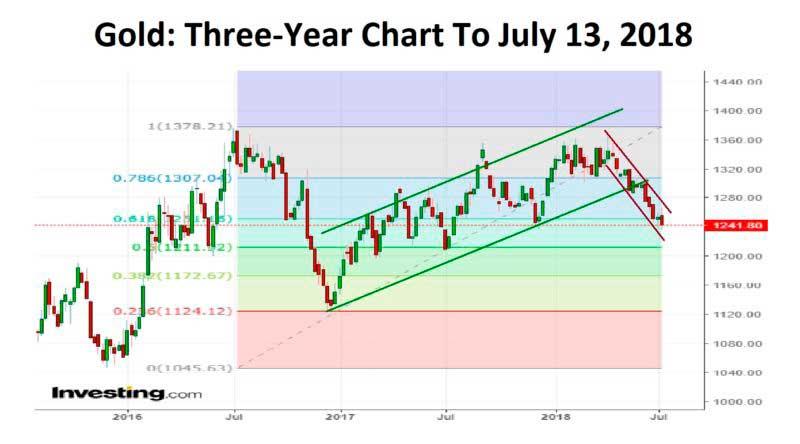 Downside momentum in other metals was limited by easing trade-war concerns despite data showing China’s surplus with the U.S. rose to record $29 Billion.

In other precious metals silver futures fell 0.98% to $15.82/Troy Oz, while platinum futures fell 1.89% to $830.40 to near 10-year lows on expectations of lower demand from the automotive sector amid potential tariffs that could hurt carmakers.

The level of oil output was a factor that weighed on oil prices. Higher Libyan production. Libya’s Abu Attifel oil field restarted operations after a two-week halt due to the closure of oil ports. This ended on Wednesday after Libya’s National Oil Corporation lifted the force majeure on four ports in the eastern part of the country after the export terminals were handed over to the Tripoli-based internationally recognized Libyan oil company.

The total U.S. rig count rose by 2 to 1,054, its second straight increase after three weeks of decline, according to the latest Baker Hughes survey.

The active oil rig count was unchanged at 863 and gas rigs gained 2 to 189 while two rigs remained classified as miscellaneous.

U.S. benchmark oil, August West Texas Intermediate crude, settled at $71.01 a barrel on the New York Mercantile Exchange by close of trade on Friday. The contract sank to as low as $69.23 a barrel Thursday, a level not seen since June 25. It lost 4.4% for the week, marking its second straight weekly loss.

Elsewhere, September Brent crude, the global benchmark, finished the week at $75.33 a barrel on the ICE Futures Europe exchange. Brent suffered a weekly loss of around 2.9%.

There is plenty of major data in the week ahead as summer grinds on.

Un the U.S. Retail Sales tops the bill with autos set to give a modest boost to the headline reading for a change this year, offsetting a price related drag from gasoline (headline 0.5%, ex-Autos and ‘Control Group’ 0.4% m/m), with revisions key as ever key, given this will be the last key Personal Consumption component to be published ahead of the month ending advance Q2 GDP data.

Industrial Production should post a solid 0.5% MoM gain (May -0.1%), with Manufacturing Output set to largely reverse an unexpectedly sharp May -0.7% MoM, with a 0.6% MoM rise in June. The NAHB Housing Market Index is forecast to remain close to its cyclical high at 69 (vs May 68), with Housing Starts seen at 1.32 Million vs. May’s 1.35 Million, lower on the month, but very robust by any historical standard.

For the UK, the run of major monthly data will be significant (along with the very fluid world of UK politics) in terms of confirming or jarring expectations that the BoE’s MPC will hike rates by a further 25 bps to 0.75% when it meets in August. Employment data Tuesday precedes the array of inflation data on Wednesday and Retail Sales on Thursday.

Among these Average Hourly Earnings are not anticipated to make a compelling case for a rate hike, with headline seen unchanged at 2.5% YoY, and ex-Bonus to dip to 2.7% from 2.8%. Headline CPI is however seen up a modest 0.2% YoY which would edge the YoY rate up to 2.6% from 2.4%, though core CPI is forecast to be unchanged at a rather less “rate hike compelling” 2.1% YoY.

In month to month terms the rise PPI Input should be modest (consensus 0.4%), but still implying a return to a double digit 10.1% YoY rise, but PPI Output Prices are still seen at a relatively subdued 3.2% YoY (from 2.9%) and core Output very well behaved at 2.1% YoY. Following on from the rather more compelling rebound in Retail Sales in May (1.3% MoM), June’s Warm weather allied with a boost from the World Cup is projected to rise 0.3% MoM, while the June PSNB budget balance is seen little changed vs May at £3.7 Billion (May £3.4 Billion).

As for China, Q2 GDP is forecast to pick up from Q1’s 1.4% QoQ to 1.6%, as such implying a steady 6.7% YoY, with monthly data on Retail Sales seen improving to a still disappointing 8.8% (vs May 0.5%), while Industrial Production is seen under pressure from a series of headwinds and projected to dip for a second month to 6.5% YoY from 6.8%.

Govt bond supply sees multi-tranche sales in France and Spain, as well as 2 & 30-year in Germany, 40-year in the UK and 10-year TIPS in the USA. 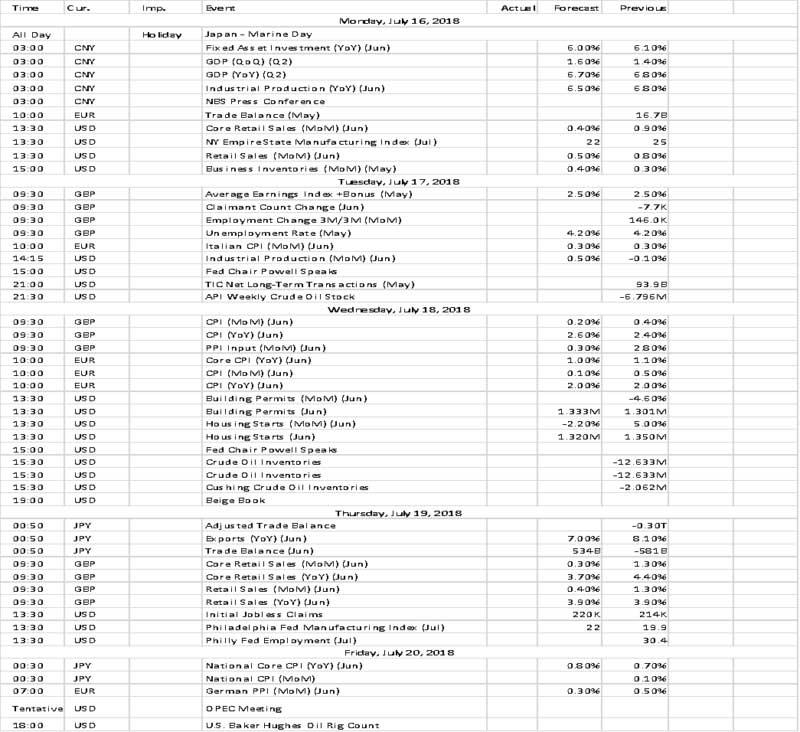