The week in equities closed with steady gains in U.S. and European markets as at the end of the week.

Shares in the biggest U.S. banks rose on Friday after the Federal Reserve completed its annual stress test and gave financial institutions the green light for plans to return capital to investors through dividends and buybacks.

The S&P 500 bank sector index was up 1.9% during the afternoon after touching its highest level in a week. Wells Fargo & Co led the move with a 5.1% gain, and most of the index’s other banks rose more than 1%.

Deutsche Bank AG’s U.S. subsidiary was the only bank to fail due to widespread and critical deficiencies in its capital planning controls.

The results were a modest positive for stocks in the sector, which has been pressured recently by concerns about a flattening yield curve.

It also said it would recruit entrepreneurs to run local delivery networks, a move that could divert business from carriers FedEx and UPS. Together, the two companies lost nearly $3Bn in market value on Thursday, with UPS bearing the greatest losses.

European stocks finish on a high after the EU appeared to reach a migration deal. The pan-European Stoxx 600 ended the session up 0.81% provisionally, supported by strong trade seen in markets overseas. On the week however, the STOXX 600 dropped 1.32%.

Market focus remained largely attuned to concerns over global trade, a week before initial U.S. and Chinese tariffs are due to take effect.

The U.S. Treasury yield curve hit its flattest level in more than 10 years on Friday after U.S. consumer spending data was below expectations.

Data showed consumer spending, which accounts for more than two-thirds of U.S. economic activity, rose only 0.2% last month. Data for April was also revised down to show spending rising 0.5% instead of the previously reported 0.6%.

To add to the pressure on the T2 was news that U.S. consumer prices accelerated in the year to May, with a measure of underlying inflation hitting the Federal Reserve’s 2%target for the first time in six-years.

While inflation is back to the 2% level on year over year core PCE, the spending aspect of tax reforms would not appear to have materialised which suggests that the Treasury curve is going to continue to grind flatter while the Fed pushes forward with at least a few more rate hikes.

The yield curve between two-year and 10-year notes (T2/T10) flattened to 31 basis points on Friday, the flattest level since 2007.

The European Central Bank is considering buying more long-dated bonds from next year to keep Eurozone borrowing costs in check even after it stops pumping fresh money into the economy. That could add an additional flattening pressure to European yield curves.

The U.S. dollar was under pressure Friday amid a rampant euro as leaders of Europe reached an agreement on a migration deal, easing pressure on German Chancellor Angela Merkel. The deal was cheered by traders as it eased political uncertainty within the bloc, sending the EUR/USD sharply higher, to $1.1677, up 0.94%. The U.S. Dollar fell by 0.71% to 94.33.

GBPUSD rose further during the U.S. session on the back of a decline of the US Dollar and amid an improvement of risk appetite. It printed a fresh 2-day high at 1.3206 and it was hovering slightly below 1.3200. Cable was rising more than a hundred pips on Friday. It received support from UK data: Q1 GDP rose above expectation.

Gold was correcting higher after four days of decline breaking above $1,254.23/Troy Oz, Thursday’s high. If gold breaks out above Thursday’s high is sustained a retest of 1,260 figure can be on the cards.

The four consecutive session losses also marked the longest selloff since a four-day slide ended February 7, (Source: FactSet). August gold is headed for a weekly loss of 1.4%, a 4% June decline and a 6.1% drop for the quarter, with prices down over 5% so far in 2018. 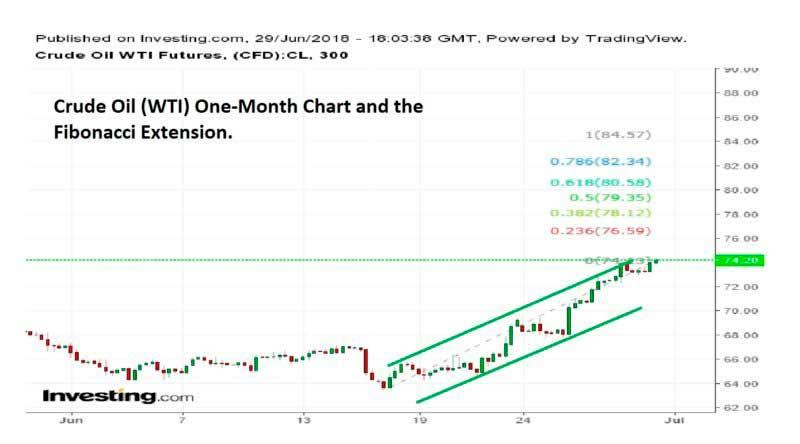 Il has been on the front foot this week after OPEC and non-OPEC producers agreed on a modest increase in production from next month, without announcing a clear target for the output increase.

The U.S. benchmark has risen more than 8% this week, while Brent is up more than 4%.

As we begin a new month, quarter and half year one may well find U.S. markets somewhat subdued by the Independence Day (July 4) holiday on Wednesday, and with the U.S. employment report on Friday, it may take may take a while to establish a direction for the various asset classes.

A look through the forecasts for the major economic data and surveys suggests that they will be taken in our stride unless they happen to deliver unexpected surprises. The sentiment is that the data will be well within the tolerance range of the forecasts as to barely raise a market flutter.

One ought to note Saturday’s Chinese official PMI figures against the backdrop of recent tepid readings. One has also to keep in mind the assessment form the PBOC that monetary policy options to deal with China’s current economic challenges are very limited.

Manufacturing PMIs are largely expected to drift lower, i.e. they will will repeat the negative tone that rising trade tensions clearly taking their toll on sentiment; Services PMI, however, may generally nudge a little higher.

US Auto Sales are expected to how a modest improvement (177.0 M SAAR vs May 16.81 M), while Construction Spending is seen posting a more modest 0.5% MoM rise after surging 1.8% MoM in April.

The main focus will be at the end of the week when the U.S. employment data is released. The need is to ignore the froth and focus on Average Hourly Earnings, which are forecast to post another 0.3% MoM rise to edge the YoY rate up to 2.8%.

Unemployment Rate should be stable at 3.8%, with the focus more on the Underemployment Rate that fell to a 17-year low of 7.6% last month, while the Non-Farm Payroll consensus looks settled at +195K.

Elsewhere the other data points of note are:

Japan’s Q2 Tankan should be steady in sentiment terms vs. Q1, though the All Industry CapEx measure is forecast to jump to 9.3% from 2.3%

The UK schedule does not offer any hard hitting news flows although it is worth keeping an eye on the BRC Shop Price Index and Q1 Labour Costs. Be sure the BOE will be watching that data as much as they are watching Wimbledon and the World Cup. (Go England) 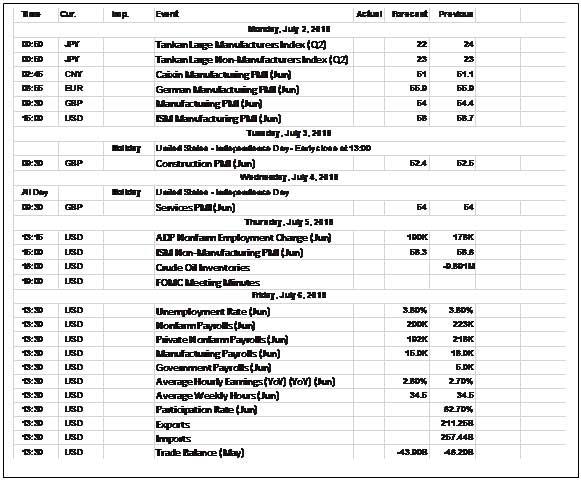