The technology sector ended the week in a turbulent manner on Friday. Symantec declined in dramatic fashion i.e. 32% as it slashed the earnings outlook for 2019. The was also a revelation that indicated the audit department was investigating irregularities that were raised by a former employee. Gamestop fell 3.5% as the CEO, Michael Mauler resigned for personal reasons. Nvidia lost 2% even though Q1 results were ahead of expectations.

Apple is on the verge of becoming the first $1 trillion publicly listed U.S. company, but even if it gets there, it could soon be overtaken by Amazon.com.

The FTSE 100 booked an eighth straight weekly gain. This was the best winning run in over a decade. G4S gained on an upbeat forecast from Exane BNP Paribas.

Italy struggled on political uncertainty and the market raising an eyebrow at the likely coalition.

U.S. import prices rose less than expected in April as a decline in food costs offset the rising cost of petroleum.

The Labor Department said on Friday import prices rose 0.3% last month. Data for March was revised to show import prices falling 0.2% instead of being unchanged as previously reported. Economists polled by Reuters had forecast import prices rising 0.5% in April.

Investors bought up Southern European government bonds on Friday, taking advantage of a rise in yields on the back of Italian political concerns, though Italian 10-year yields were still set for their biggest weekly rise since February.

Italian, Spanish and Portuguese 10-year borrowing costs dropped 2-3 basis points, outpacing better-rated peers at the end of a week in which the increasing likelihood of an anti-system coalition taking power in Italy had hurt peripheral debt.

Such reversals are not unusual in the market, particularly given that Italian 10-year yields had reached a seven-week high of 1.945% on Thursday. On Friday, it was down 4.5 bps from Thursday’s peak and down 3 bps from the close.

Speculators’ net short Dollar position in the latest week fell to its lowest level in nearly three-months, according to calculations by Reuters and Commodity Futures Trading Commission data released on Friday.

The value of the net short dollar position was $10.84 Billion in the week ended May 8, from $15.15 Billion the previous week. This week’s Dollar net shorts were the smallest since the week ended February 20.

Short-term investors have been short the dollar since mid-July last year. U.S. Dollar positioning was derived from net contracts of International Monetary Market speculators in the Yen, Euro, Sterling, Swiss Franc and Canadian and Australian Dollars.

In a wider measure of Dollar positioning that includes net contracts on the New Zealand Dollar, Mexican Peso, Brazilian Real and Russian Ruble.

The U.S. Dollar posted a net short position equivalent to $13.31 Billion, down from $18.32 Billion the previous week.

Sentiment on the Dollar has markedly improved in the last few weeks due to surging bond yields and signs of rising inflation that have spurred expectations of more aggressive interest rate hikes by the Federal Reserve.

Wall Street and Main Street are both heavily bullish on the near-term direction of gold prices, based on the Kitco News weekly gold survey. Traders and analysts who take part in the Wall Street poll cite mostly technical-chart factors – in particular, gold’s ability to hold around the 300 and 200-day moving averages and the psychologically important $1,300-an-ounce level during a recent price pullback. They also suggest the U.S. dollar’s recent strength may be waning.

This week, some traders and analysts are starting to talk openly about the return of $100 crude!

It has been a dramatic turn for oil, with Brent crude hitting $78 a barrel last week after the US withdrew from the Iran nuclear deal, re-imposing sanctions on the third-largest producer in Opec. Prices are now at the highest level since 2014, when the rise of the US shale industry first swamped the market and prompted many to write obituaries for triple-digit prices.

The rally, many believe, can continue. Forecasts for the impact on Iran’s sanctions are wide, with them seen cutting as little as 200,000 barrels a day to 1.5m b/d. 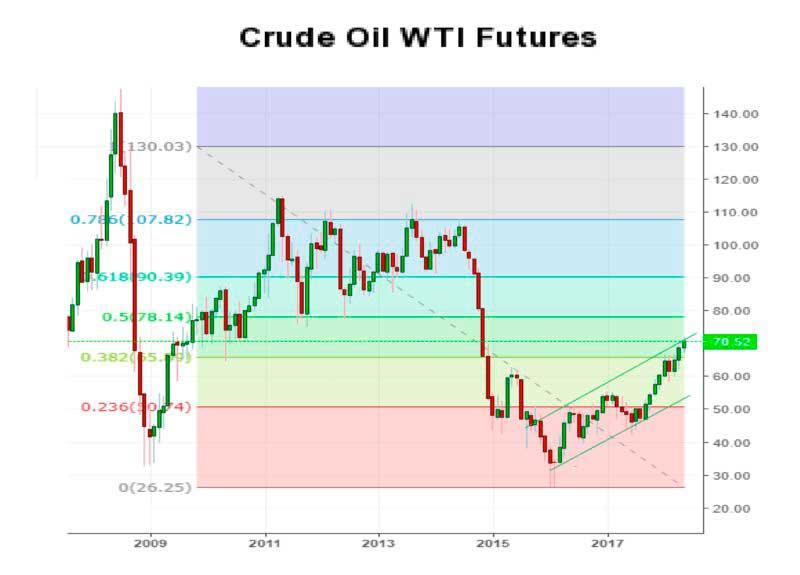 Demand has been incredibly strong, boosted by a global economy that is growing at the fastest pace since 2008. Supply cuts by Opec and Russia have exceeded expectations, with a handful of members, not least Venezuela, not so much cutting output as battling to stem a precipitous decline in their ability to pump crude.