Firstly, before we begin, all at LAT wish you A Happy and Profitable New Year in 2018.

The bull run in equities is now over nine-years old and so naturally thoughts are rising as to whether a correction is due. Certainly, if the current trend continues then by July 2018 the stock markets will be in the longest ever bull-run in history. One could suggest that this is not a time to begin a long-term investment in the equity market.

The U.S. equity market (using the S&P 500 index as a proxy) has surged 20% to 2,680 this year as the American economy continued its recovery and investors looked forward to corporate tax cuts promised by the Trump administration. There are 14 Wall Street banks that expect the index to rise another 5% to 2,807 in the coming year. This will be driven by tax cuts and continued strength in the global economy.

However, such a gain would be rather pale in comparison to the returns in the U.S. during 2017.

Technology and health care have been among the best sectors in 2018 and if one takes the past 20-years both sectors at trading at their median PE ratio’s even with the run they have enjoyed. 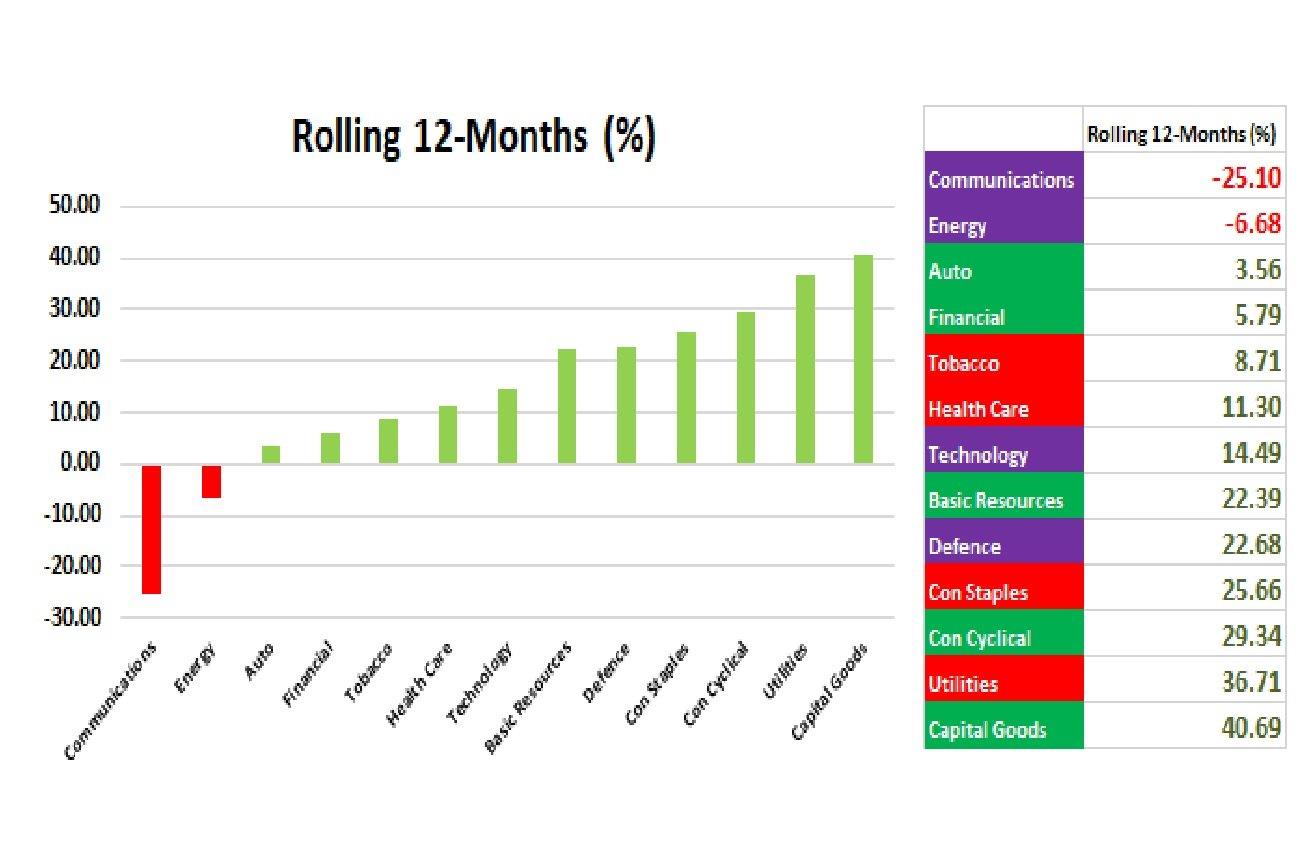 Venture funded tech firms such as Alphabet, Apple, Alibaba have all passed old leviathan’s such as Exxon Mobil, J.P. Morgan, and Johnson & Johnson in terms of market cap, reflecting the changing nature of the business world in which we operate.

Sectors that are at a premium are Consumer Staples, Broad Industrials, Materials and Utilities; these are at 14% to 20% premium relative to their 20-Year median PE ratios.

One should expect greater volatility and slower growth in the later part of 2018 as the Fed raises interest rates so making it more expensive to borrow.

The global economy is expected to be driven by higher commodity prices which should break the aggressive decline that began in July 2014. That should support commodity currencies such as the Australian, New Zealand and Canadian Dollars; although the latter is still highly correlated to the price of crude oil.

An expected outflow of capital from the U.S. is likely to weigh on the U.S. Dollar. In other words, the strengthening of the global economy should limit the U.S. Dollar’s gains and eventually drive it lower.

U.S. interest rates rose faster than those of any other country during 2017 and this should continue in 2018 with the Fed expected to raise rates at least three times by a total of 0.75%.

Normally, “hot” money seeks its highest level so one would assume that rising rates should be attracting inflows of foreign capital into the U.S. This is not expected to occur in 2018 since several influential investors believe the Fed may be nearing the end of its rising interest rate cycle despite all expectations that the U.S. economy will book good growth in 2018. One reason is the worrying rise in credit levels.

Given that the Fed has already raised rates three times in 2017, Fed moves have lost their shock value, which is probably the main reason the U.S. Dollar weakened last year.

One area where extreme caution must be deployed is in cryptocurrencies. Following extraordinary gains in 2017 we saw, at the end when Bitcoin had futures contracts introduced, just how volatile such tools can be. The underlying blockchain may be the real item with intrinsic value, however, one cannot overlook the value of BTCUSD. A deep crash could have the potential to derail the global economy.

U.S. oil prices ended above $60 a barrel in the final trading day of the year on Friday, December 29 for the first time in over two years amid signs that a glut in global inventories is easing. However, in a thin market do not read too much into such a move.

On December 28th, the U.S. Energy Information Administration reported that crude stockpiles fell to the lowest level since October 2015 in the week ended Dec. 22. It was the sixth consecutive weekly decline in U.S. stockpiles, according to the EIA data. However, give the domestic U.S. shale oil market a week to get up and running again and higher prices will simply encourage more supply.

In the metals market, a weaker dollar helped propel gold prices to a three-month high back above the $1,300 level on Friday in the final trading day of 2017. Gold futures for February delivery settled at +0.61% at $1,305.10 on the Comex division of the New York Mercantile Exchange, its highest close since September.

For 2017, the precious metal gained 14%, the largest yearly percentage gain since 2010. Recent weakness in the Dollar has supported gold prices by making the Dollar-denominated metal cheaper for holders of other currencies.

The week ahead, what to watch on the economic calendar:

Investors and traders will have to waste no time in shaking off the holiday mode as they return to work on Tuesday. Data comes thick and fast; however, most eyes will be geared to Friday when the U.S. employment report for December 2017 is due.

The U.S. Labor Department will release the December Non-Farm Payrolls report at 08:30AM ET (13:30GMT) on Friday and the expectation is for the data will show jobs growth of 189,000, following an increase of 228,000 in November. The unemployment rate is expected to remain unchanged at 4.1%, while average hourly earnings are expected to rise 0.3% after an increase of 0.2% a month earlier.

Readings of this magnitude would help the U.S. Dollar as they would support the Fed’s case for higher interest rates in the coming months.

With monetary policy in mind, the Federal Reserve will release minutes of its December policy meeting on Wednesday at 2:00PM ET (19:00GMT).

The Fed hiked interest rates for a third time in 2017 at the conclusion of its two-day policy meeting on December 14. This was a decision that was fully discounted and indicated that the Fed’s intention is to maintain a similar course of gradual rate increases during 2018.

There are other data points from the U.S. as besides the employment report such manufacturing and service sector growth, construction spending, auto sales, weekly jobless claims, factory orders as well as monthly trade figures.

Friday’s Eurozone inflation data will be closely watched at 10:00GMT (5:00AM ET) amid persistent concerns over sluggish price growth in the region.

The consensus forecast is that the report will show consumer prices rose 1.4%, cf. an increase of 1.5% in November, while core prices are expected to gain 1.0%, up from 0.9% in the prior month.

At the final meeting of 2017 the ECB hiked its growth forecasts, but admitted that inflation still won’t be on target of 2.0%, even by 2020. The ECB also voted to leave interest rates on hold and repeated its commitment to running an asset-purchase stimulus programme (QE) until at least next September. It will need to remain flexible as the Italian elections in March may well prove to be the catalyst for turbulent times within the Eurozone.

In the U.K. where Brexit will still a dominant theme, one should focus on three reports covering activity in the manufacturing, construction and dominant service sector amid growing concerns over the effect of Brexit on the economy.

The manufacturing PMI is forecast to inch down to 58.0 from 58.2 a month earlier, construction activity is expected to improve slightly to 53.2 from 53.1, while a survey on Britain’s giant services sector is forecast to tick up to 54.1 from 53.8 last month.

The Bank of England left interest rates on hold at 0.5% at its final meeting of 2017, in an anticipated decision, just a month after the first-rate hike in nearly a decade. The rise of inflation to 3.1% in November is starting to cause some concern within the BoE.

Elsewhere China will release data on the country’s manufacturing sector. The Caixin manufacturing index is due at 01:45 GMT Tuesday (9:45PM ET Monday). The survey is expected to ease to 50.6 from 50.8 in the preceding month.

The official manufacturing purchasing managers’ index released on Sunday slowed slightly to 51.6 in December from 51.8 in November, in line with economists’ forecasts.

Have a great week.