Latest data for the weekly Commitment of Traders (COT) report from the Commodity Futures Trading Commission (CFTC) on Friday, November 17th showed that large traders and currency speculators raised their bets for the US Dollar.

Non-commercial, large futures traders, held an overall US Dollar net position totaling – $0.64 Billion as of Tuesday, November 14th, (Source: CFTC and Reuters). This was a weekly increase of $1.28 Billion from the -$1.92 Billion total position registered in the previous week.

The aggregate speculative US Dollar position has improved, i.e. is less bearish for seven consecutive weeks; it is currently at the lowest bearish level since July. 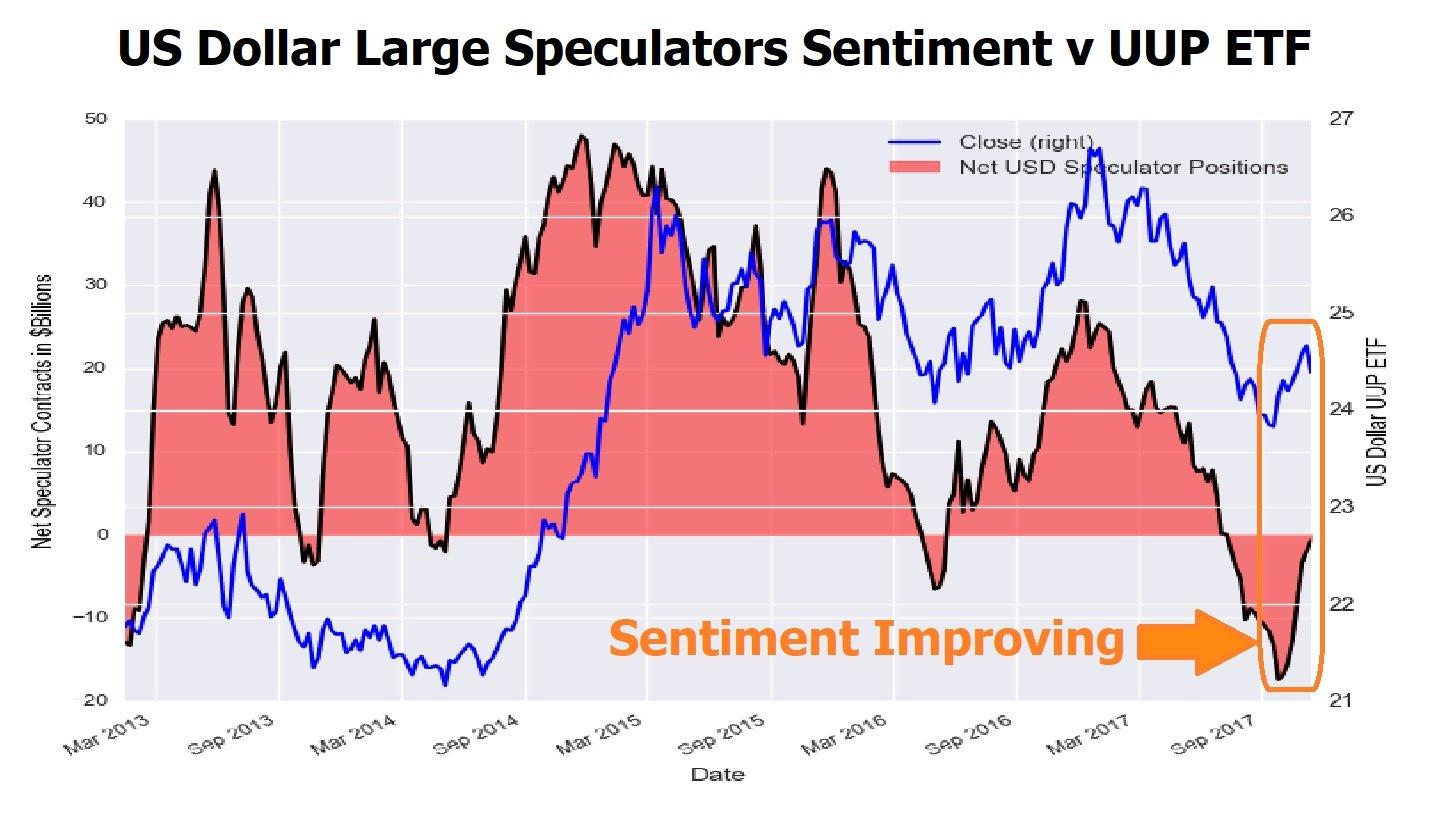 Is this too optimistic for the Dollar? We ask this as the market may be fully convinced that the Fed will raise the Funds Rate in December, however, recent economic reports have been far from encouraging. For example, retail sales growth beat expectations but at 0.2% the increase was tepid cf. the 1.9% rise in September. CPI also eased due to lower food and energy costs while manufacturing activity in the NY and Philadelphia regions pulled back.

We do not expect the Fed to shy away from raising interest rates in December, we would caution being too long the Dollar as there is a risk of a more cautious tine to the guidance for 2019.

That leads the conversation to tax reform and we acknowledge that the House voted to pass its tax bill this week, but the Senate is where the serious battle will take place.

While the House and the Senate Finance Committees passed their respective versions of the bill there are risks that last-minute changes will be made to embrace the Affordable Care Act and make individual tax cuts temporary compared to corporate tax cuts being permanent. This has not been taken favourably well by Democrats, even some Republicans. Senators Ron Johnson and Susan Collins became the first Republicans to come out against the Senate bill.

This has the scope to become a serious problem as the Republicans cannot afford to lose more than 2 votes. Remember, they have only a 52-48 majority in the Senate and no Democrats are willing to support the bill.

In the commodity space, we note that energy speculators lifted their net positions in the Crude Oil WTI Futures markets this week to a record high bullish level, according to the latest Commitment of Traders (COT) data released by the Commodity Futures Trading Commission (CFTC) on Friday.

Non-commercial futures contracts of WTI Crude Oil futures reached a net position of 596,466 contracts in the data reported through Tuesday, November 14th. This was a weekly increase of 51,260 contracts from the previous week which had a total of 545,206 net contracts. Speculative positions have now risen for five straight weeks and on to a new record high that surpasses the previous high of +556,607 contracts that was registered on February 21st of this year.

Watch this metric this week as crude oil prices suffered their first weekly loss in six weeks as fears over rising U.S. output persisted while falling expectations for an extension of OPEC-led output curbs weighed on sentiment.

Gold prices rose on Friday boosted by a weaker Dollar hit by doubts over whether Republicans can pass the Trump tax overhaul. Gold futures for December delivery settled 1.27% at $1,294.41 on the Comex division of the New York Mercantile Exchange; this was the highest close in a month. For the week, gold prices ended up 1.75%, its strongest weekly performance since early October.

Looking ahead Monday sees ECB President Mario Draghi speaking at 16:00 GMT and the day after at 23:00 GMT Fed Chair Janet Yellen is also to speak, this should be watched for any clues as the tenor going into 2018.

On Tuesday the UK will have information on the Inflation Report at 10:00 GMT and in the afternoon at 15:00 US existing home sales for November will be released with 5.43 Million units annually expected cf. 5.39 Million in October.

On Wednesday, the UK Chancellor of the Exchequer will deliver the budget in what can only be described as difficult times. Watch for any knock effect in Sterling, Gilt yields, and the various FTSE indices.

As we in the UK digest the Budget the US will see at 13:30 GMT the reading on Core Durable Goods where 0.55 is forecast cf. 0.7% before. However, this is October reading and so may prove to be a less impacting data point. At 19:00 GMT there will be Fed minutes, as with the Yellen speech on Tuesday, look for any clues as to the tone for 2018.

Expect the market to be thin on Wednesday and of course, Thursday is Thanksgiving in the US with many market agents taking the original bargain shopping day “Black Friday” off. The UK will have GDP for Q3 released as a preliminary observation on both YoY and QoQ measures, both measures should be steady at 1.5% and 0.4% respectively.

No major moves should emerge on Friday although the Dax, Bunds, and Euro could flicker when the German Ifo Business Climate figure is released for November at 09:00 GMT. Look for 116.5 from 116.7.

Pretty choppy week for major assets, but the BOE and BOJ to help with tricky market conditions

Wild week in markets only results in more of the same

Look ahead to some interesting opportunities into next week