General Electric Co. shares booked a gain of 3.3% last week, however, it is still the worst-performing Dow Jones Industrial average stock for the year to date. Even with the weekly gain, shares are down 22.7% YTD in 2018.

The week did not start well for GE after JPMorgan said that GE is the most expensive stock in its sector of the market. The implication, of course, is that the share price must fall even further.

There was a quick, second punch in that the company’s dividend will have to be cut slightly, slashed or even eliminated. JPMorgan do not believe that GE’s 2018 earnings per share forecast of $1.00 to $1.07 has a chance of becoming reality. A more realistic estimate, they say, is $0.50 a share.

For equities in general one should note that risk trends over the past weeks have been progressing towards a bullish recovery. That may be the technical view, however, it really feels half-hearted.

We say this as the market is torn between pure market and economic signals and the rise of unchartable political risks that have raised volatility.

Since then, there have sessions of seemingly steady recovery and yet the transition of a short-term technical breakout into a meaningful follow through requires conviction.

We are, sadly, not currently in such a phase as fundamentals are keeping the market from establishing a more productive drive be it higher or lower.

The continuously unfolding trade war between the US and China, threats of military action by the US and Russia, and persistent political scandal have made investors uneasy about the future.

All one can reasonably expect, given the range of possible outcomes is for volatility without no sense of course setting to prove itself to be a persistent problem. 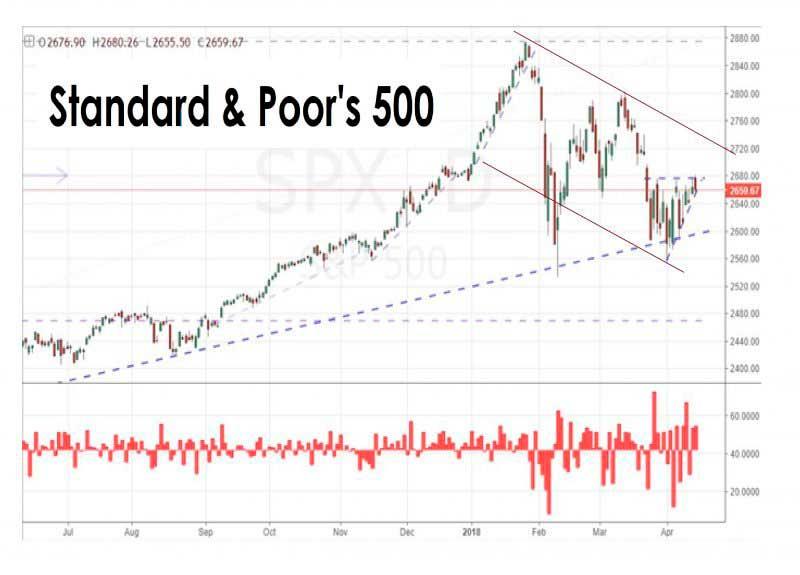 Investors have shown signs of returning to the corporate bond market this past week with junk bond funds recording a small positive inflow for the first time since January. So far this year the investor community have expressed concern that values were overstretched as many household corporate names appeared to be accumulating too much debt against a backdrop of rising inflation and the risk of a harder pace of rate increases from central banks.

High yield funds booked an inflow of $386 Million in the week to April 11 (Source: EPFR Global) as many investors have reassessed the market and determined that corporate debt look attractive now.

That may too optimistic as one has to be wary of declining creditworthiness, and one cannot overlook the degree of high gearing.

One must be cautious as the latest snapshot of U.S. inflation issued by the Labour Department showed core consumer prices rising 2.1% in March – their quickest pace in a year. The pick-up in price pressure should help reinforce the view of Federal Reserve officials that inflation, which had been persistently sluggish throughout much of 2017 had been held back by temporary factors.

The Dollar neared a 1-1/2-month high against the Yen on Friday, as an improvement in investor risk appetite buoyed equities and pushed U.S. yields significantly higher.

The Dollar was steady at 107.385 yen after gaining more than 0.5% overnight. A rise above USDJPY107.490 would take it to its highest since late February. The Dollar has gained about 0.3% versus the Yen this week.

The Euro was little changed at EURUSD1.2328 after losing 0.3% on Thursday when it ended a four-day winning run. The Euro has risen 0.4% on the week, supported by comments from European Central bank officials that reinforced expectations toward monetary policy normalization.

Gold prices failed to hold an overnight rally in London on Friday, dropping back to show no change for the week in Dollar and Euro terms as Moscow hit back at US sanctions and accused a “Russophobic campaign” of staging last weekend’s chemical attack on civilians in Syria.

Trading back at $1337 per ounce, the gold price in Dollars held over 2% below Wednesday’s spike to 20-month highs

Gold has found the $1,360 resistance level a brick wall since 2014. Now the question is being asked again as gold-bugs are wondering where the next resistance lurks if this level is finally pierced? Fibonacci extensions are set at 1366 and then 1386.

Copper prices are down around 6% so far this year after hitting a four year high in December amid concerns that protectionist trade policies and the prospect of an economic slowdown in China, the world’s largest consumer of industrial metals, could hit demand.

The potential fallout from a U.S. led military strike in Syria will likely be the main driver of sentiment in the oil market in the week ahead.

New York-traded West Texas Intermediate crude futures rose 32 cents, or roughly 0.5%, on Friday to end at $67.39 a barrel by close of trade. The U.S. benchmark touched its highest level since Dec. 2014 earlier in the day.

Meanwhile, London-traded Brent crude futures, the benchmark for oil prices outside the U.S., tacked on 56 cents, or nearly 0.8%, to settle at $72.58 a barrel.

For the week, WTI gained about 8.6%, the strongest weekly percentage performance since late July of last year, while Brent saw a weekly increase of 8.2%.