Digital assets, popularly known as Cryptocurrency, are resuming their price correction after triggering a peak in December 2017.

The event time-stamped a critical turning point away from the mania-fuelled linear trends of several thousand percentile, while also marking a late-stage economic cycle of speculation. Amplified by a historic environment of low volatility and low interest rates, investors felt emboldened to chase high-risk returns, even if it meant standing in front of a proverbial bulldozer.

The days of a one-way trade, or free-lunch are over. It should come as no surprise that exactly two months after the peak in Bitcoin, the financial markets were hit by a re-awakening in volatility, marked by a flash-crash, which led to a record breaking 1600-point intraday drop on the Dow Jones Industrial Average, from all-time highs. The rotation from greed to fear had begun.

Bitcoins peak-to-trough correction of -70%, is now within a traditional short-term negative cycle. This bearish pattern is developing an ABC shape of a) the crash-fall b) recovery bounce, followed by c) the rest of the fall. The double price failure at the pivot-line around 11,000, highlights the market’s lack of upside momentum (Fig 1-panel C), which coincides with a new timing cycle (Fig 1-panel B).

Risk management is still key. Avoid trying to catch a falling knife, with an average daily volatility of 20%. Watch for a potential break of the long-term 200-day moving average line at 7,224, to unlock further losses into next key support at 3,000 (highlighted by the probability distribution indicator). Only a sustained bullish price reversal back above 11,000 would neutralize this scenario. 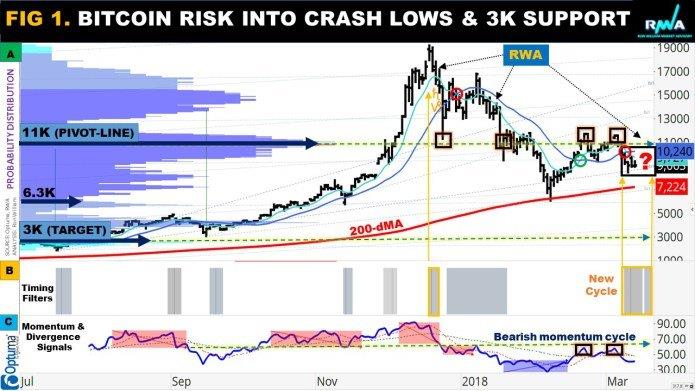 A historic review of the last eight years of Bitcoin’s price activity highlights an average volatility signature of -85%, with the greatest drawdown of -93% (Fig 2). This simple, yet reliable statistical yardstick offers a further potential -15% downside risk, which also equates to the aforementioned price target of 3,000. In hindsight, the last two-years of parabolic returns, led to an astonishing +3314%, with minimal volatility, and now marks significant asymmetric risk. Meanwhile, sentiment measures from Google (Fig 2-lower chart panel), tell us the search term Bitcoin Bubble has once again spiked on the mind of traders around the world. This same indicator proved a valuable lead signal ahead of three interim peaks so far. 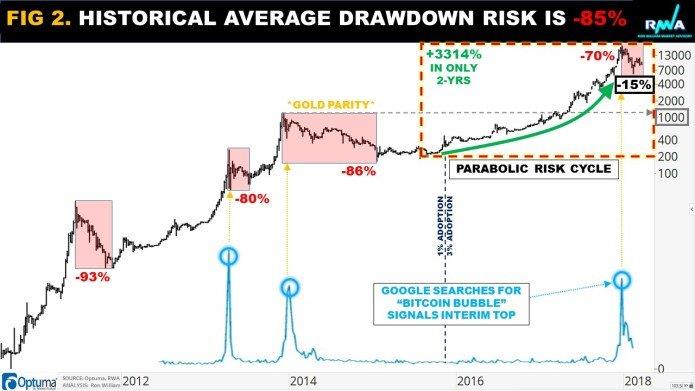 However, it is vital for the greater collective to ask themselves what an asset price bubble actually means? The term has been screamed at fever pitch levels over the years, with little real understanding, other than a headline grabbing soundbite or tribal group think. The digital asset mania is not a tulip bubble, in the sense that it no longer has any intrinsic value.

In fact, contrary to popular mainstream opinion, digital currencies are only just getting started within their new paradigm cycle, as part of a greater and accelerated technological wave of economic innovation. History teaches us, rather perversely, that all such paradigms are started, and not ended by bubbles. This was certainly true for the technology mania of 2000, which saw internet stocks rise to stardom, only to later crash by 90%, and yet they still changed our lives many years later.

Here and now, according to consensus, estimates the digital asset market is set to grow to a one trillion-dollar valuation in 2018, and yet other surveys only cite a 3% adoption of this innovative technology within traditional business transactions. The sweet spot threshold is 20% for mainstream adoption of prior new technology paradigms. What justifies such a giant valuation?

The answer is found in the power of the digital currency network user base. Akin to social-media stocks like Facebook, the success of the platform is directly proportional to the number of users; more people, more value. This is not a tulip bubble in the sense of an over inflated bidding war or traditional auction system. It is primarily due to the very nature of its decentralised, peer-to-peer model, that allows it to grow exponentially, on a scalable basis.

Unfortunately, the early stages of this new currency model attracted plenty of hot money speculation and bad actors to the stage. Partly for this reason, it is arguably healthy for the market to be experiencing a shakeout within this latest bearish correction. In fact, in terms of short-term price performance, there is only one digital currency, notably Ripple, that is still flagging positive net gains, since the peak of December 2017 (Fig 3-panel A).

In this race to the bottom, Ripple remains one of the most relatively stable coins (Fig 3-panel B). This is also due to its already sizeable cliff-drop from the record-breaking altitudes of +3,500% in only 11 weeks. From a behavioural psychology standpoint, the worst seems to be over.

Meanwhile, Ethereums price action is warning of great mean-reversion risk, as it verges on the edge of a multi-month breakout pattern (Fig 3.0-panel C). A sustained break under 600 will unlock sharp losses into a price vacuum (with little price support), towards a lower target at 300.

Remember, none of this is due to fundamentals, or to underline techie speak about one coin’s competitive advantage versus another. These tangible observations are based on chart facts or price-based dynamics. From a big picture perspective, digital assets remain in stage one of the new paradigm cycle (Fig 4). Charting the NASDAQ technology stock market helps to visualize the historical rhyme or deja vu with the internet bubble of 2000. The Y2K technology mania offers an indispensable price analogue with our latest digital asset wave, as part of a three-stage cycle process.

Stage 2: AMBER-Transformation, where hard lessons are learnt and new structures are built. Regulation and government related initiatives, pave the way for smart money products, which in return increases broader volume and reduces wild swings in volatility. This is an evolution-revolution period where only the winners survive, and famous rotations between poster child leaders like Facebook & My Space are made. Here and now, out of over 1500 digital currencies, only 30% are likely to survive. Selectivity remains key. Swing trading is one of the most popular trading methods that capitalise on shifting price movements over very brief intervals. Swing traders will attempt to profit from the ups and downs of stock prices.

It is essential for investors to have a solid grasp of trading terminology, particularly the phrase "bid-ask spread," since purchasing and selling rep…